Urban Planners seek to create “livable communities,” places where people can live and shop and work without depending on their cars so much. Their ideal community would include higher density residential construction with ground floor retail, increased green spaces for public use, adequate public transportation and pedestrian safety, Like most municipalities in south Florida, the City of Wilton Manors has been wrestling for the past decade with the transition from being a sleepy suburban community of Fort Lauderdale to becoming a destination for visitors from around the world. And, it’s not easy.

Wilton Manors is considered an “island city” because it is surrounded by the South Fork of the Middle River. The waterways are governed by South Florida Water Management District and the City has done a good job creating recreational opportunities through the City parks located along these waterways. There’s a boat ramp at Colohatchee Park and kayak rentals at Richardson Historic Park & Nature Preserve. Oh! And, let’s not forget the wonderful waterfront experience of Island City Park Preserve!

A more recent segue in urban design is the inclusion of historic buildings as a part of the area’s redevelopment. Here in South Florida, it was pretty much tear everything down and build new. Until the year 2000, when leaders across Florida began to place more value on Florida’s history and the sense of place that drew people to visit and live here.

It was really a lucky accident for Art Gallery 21 that the Woman’s Club of Wilton Manors was built adjacent to Hagen Park and City Hall during the mid century era. The area around the Woman’s Club, Hagen Park, has changed over the years from a little neighborhood park with a playground and a couple of tennis courts to the state of the art site we have today. The “new” City Hall was built facing Wilton Drive and there’s ample parking for the public (except on Saturday nights). Over the years that these changes to public land were taking place, Wilton Drive, the designated Arts & Entertainment District, was beginning to change, too. Gone was the Junior League Thrift Store, the office supply and hair salon, and the Wings ‘n Things, and in their places, restaurants, bars and specialty shops, bringing a new vibe and new people. It’s not uncommon to hear about someone who came here to visit and loved the “small town” feel so much that they came back to live here.

That “small town” feel is one of the things that makes Art Gallery 21 so special. The Woman’s Club was built in 1956 on land donated by Alvar Hagen, a local community activist. It’s not a large building, with maximum occupancy set at 75. (And, that’s pushing it!) Hagen’s wife, Virginia, was one of the first club presidents, and the couple were known for their community spirit. Over the years, the Woman’s Club used their social capital to raise money for the support of  local charities and they were a part of the fabric of community life. They were, in essence, what gave us that “small town” feel. 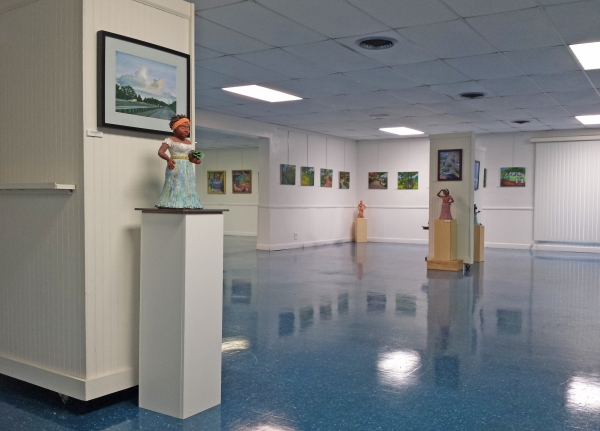 All good things must come to an end, they say, and, so, the Woman’s Club retired their chapter in January of 2011.The property was deeded over to the City because they knew the City could take care of the building. Older buildings come with their own set of problems, and preserving the historic integrity of the Woman’s Club presents challenges that City staff have addressed quite well.

It was the empty, unused building, in need of a little paint and a lot of TLC, that we discovered early one Saturday morning in November 2011 that lead us to see what it could be … Art Gallery 21.

Art Gallery 21, Inc. is a 501(c)(3) nonprofit organization registered with the State of Florida and is working in partnership with the Wilton Manors Leisure Services Department to bring more art to the Art & Entertainment District.

This site uses Akismet to reduce spam. Learn how your comment data is processed.